How clean eating virtually gave me an eating disorder 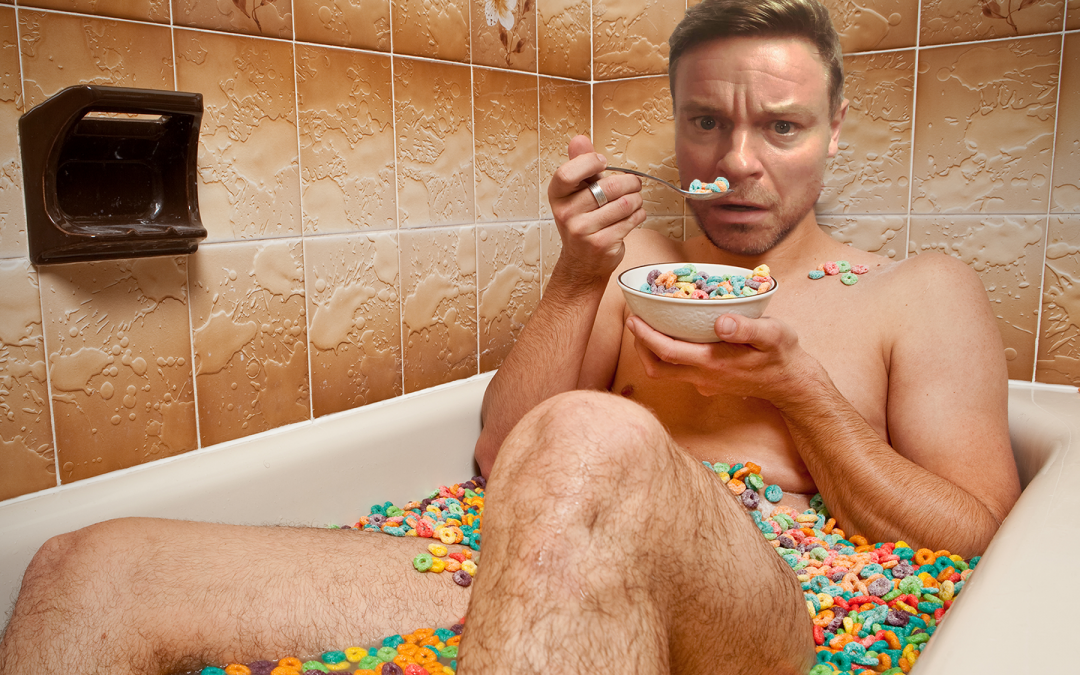 I ate this guilt free as Im currently training more than ever in preparation for Manchester Marathon in April 2020, closely followed by my first Triathlon a month later.

Years ago before I became a coach I was partial to the odd fry up.

When I became a trainer almost 14 years ago I learnt more about real foods and started to have omelettes for brekkie – more protein and a load of veggies instead of starchy carbs..

I lost weight and felt awesome….

I then went on courses that told me things like cereals, grains and processed foods were toxic and full of bad chemicals that would be transferred into fat.

I was also told to avoid the ‘insulin spike’ that carbs gave you because this made you store fat.

So of course cereals, bread, pasta (anything with gluten because it gives you depression) were out – and being the motivated coach I am I would preach this message with enthusiasm….

I’d lost weight eating ‘cleaner’ foods so of course the foods I ate previously made me fat and were bad right? Well wrong actually…

You see back in the day when I lived off a higher carb diet – my movement was very little too, I worked in an office and was mainly sat on my arse for long periods… I also spent 2 years working as a courier, sat on my arse, driving a van all day.

When I became a trainer and learnt more about nutrition two things happened that I was blissfully unaware of, until now….

1) I moved a hell of a lot more. I’d gone from sedentary office and driving jobs to being on my feet all day coaching clients, joining in with many and training on my own too. I’d say my activity had increased 150%!!!

2) I ate less calories…. Even though I was blissfully unaware – I was actually eating a hell of a lot less. My massive Bowl of pasta being replaced by equally the same sized bowl of greens was alone probably saving me 400 calories a day.

Multiply that by 7 days a week and that’s 2800 calories saved with just that one tweak!

Also that fact that I was eating more protein was actually keeping me more satisfied that a carb rich diet….

Therefore I lost weight not by banning ‘bad’ foods and replacing with ‘good foods’ BUT by creating a calorie deficit!

Again at the time I didn’t understand this but it didn’t matter.

I was lighter, fitter, happier and more energised than ever so it was all to do with ditching the bread, cereals and other carbs right?

I became the ultra clean eater for years and the more courses I went on the more I was told to BAN more food groups such as different types of dairy – ( which killed me because I fucking love cheese) because of hormones, gut health , bacteria – I don’t fucking know I just went along with it…..

Eating ‘clean’ was easy! I lived alone and there was no junk in the house. I’d simply pop to Tescos every evening to pick up more eggs, broccoli and greens and that was my life – I was 12 stone 6 dripping wet and could run a half marathon in 1 hour 24. I felt unstoppable…..

But then – my life changed 360 degrees when I met my partner and in a short period of time we had two kids…..

Not just that but we moved into a big house, I took on staff and went VAT registered and my missus income stopped just to put the cherry on the top of the stress!

Now what’s this got to do with a fucking fry up I hear you ask?

Have you ever tried to eat 100% clean when you are exhausted and with insane pressure on you?

I’d last for a few days then fall into a tonne of sugar , crisps and all other junk.

Not just a little but a LOT

I’d have epic binges then feel guilty because I’d failed, then start again on Monday going even cleaner and stricter only to fail again then repeat the cycle….

I’d eat clean for a few days then crash, binge and burn….

After a period of time I decided to seek some help from a CBT counsellor, not just for the binges but for dealing with the complete change in my life which outwardly I put on a brace face about but inwardly I was so overwhelmed and was struggling to cope with….

What this guy asked me was “Why I was limiting food groups?” “why was I banning certain foods?” And why couldn’t I just allow myself the odd bar of chocolate or bag of crisps if I was tired and had a craving?

Well quite frankly I could not fathom this because my mindset was programmed to either ‘clean’ or ‘dirty’ foods and if I did eat such as one biscuit my diet was fucked and I’d have to pick up a 6 bag of crisps, 5 chocolate bars and 4 beers on the way home then start again on Monday – yes even as a coach that’s how bad it got….

I fancied a bag of crisps I’d have it and move on. This was so challenging but overtime it started to sink in….

Around this time there was also a lot of talk about ‘flexible’ dieting in the industry (circa 2016) which stated that no foods were off limits as long as you were within your calorie requirements for the day….

At first I scoffed – count calories and eat unclean foods? That’s everything I was against and I tried to make jokes about it – in my head laughing at all the trainers I knew that were advocating it…

However, I was in this mess, unable to stick to the message that I was promoting and at times feeling like a fraud – why the fuck should I be telling my clients to be so strict if I can’t fucking do it for more than 3 days?

Around this time also saw the emergence of the app called MyFitnessPal whereby you could track your macros which was followed by the rise of the fitness tracker such as the FitBit and the Garmin.

In public I was still promoting this 100% clean message but I could see the industry was changing and I kept a very close eye on it.

After 8 months of C.B.T I had developed a new relationship with food – I was now able (for the first time in my life) able to eat 1 packet of crisps, 1 bar of chocolate and move on, without an epic binge and still keep up with my ‘cleaner eating’ for 80% of the time.

Then I got a FitBit (Now a Garmin, Garmin’s are awesome BTW) and started to track my steps, exercise and daily calorie output.

I also got educated about N.E.A.T (Non Exercise activity thermogenisis) which are the calories your burn on a day to day basis just doing normal stuff like walking to work, taking the stairs, putting the washing out etc.

I found that my NEAT was really high compared to a LOT of my clients that were office bound (and it had always been since becoming a trainer I was just unaware of the extra calories Id burn because of it).

And with a greater understanding of the law of thermodynamics (calories in vs calories out) I was now able to factor in the odd chocolate bar, lolly, (actually a tonne of fruit pastille ones!) even a few pints of Guiness (although currently off the beer) into my diet and still lose weight!

This was a fucking REVELATION for me after being told for years by my peers to regulate hormones, control insulin and detoxify regularly….

This has brought me to right now – penning this article, sat back comfortably around 85kgs after spiralling up to 96kg for the few years after the kids were born, trying to remain the ultra clean eater and binging every weekend….

So, this morning, I fancied a big brekkie, it was lush!

I’m not about to go on a binge, I probably won’t eat now till I go home at 7pm as it was a big feed.

Did I get an insulin spike after the fry up? Probably – will it make me gain fat? Only unless I go to bed in a calorie surplus.

Would I recommend people eat a full English / Welsh brekkie everyday? – no not really, as there is a variety of different foods that you can eat for breakfast with way more nutrition.

And guess what – you don’t even have to eat breakfast if you are not hungry because it doesn’t magically rev up your metabolism (yes we were told that too) 3 or 4 days a week I don’t eat it because when Im up early Im not hungry.

Have I completely changed my tune on ‘clean eating?’ NO – if by the term ‘clean eating’ we mean lots of fresh veggies, fruits, good quality protein sources etc – then there is no way I am against this – it’s what I base 80% of my diet around…

But here me when I tell you this that NO one food group should be off limits – the danger is in the dosage….

So, if you are training regularly, eating ‘healthy, whole foods, clean’ (whatever you want to call it) 85% of the time, sleep well, move well and drinking plenty of water on a daily basis and you fancy a little bit of bread, crisps, chocolate or even a bowl of cereal – understand that your ‘diet’ is not broken and that is not a green light to say ‘fuck it’ and binge like I used to do.

Simply account for those calories and move on – its so fucking liberating….

I’ve always tried to pass on a positive message and have always done what I have thought best for my clients and have a history of fantastic results.

There is a saying which says “You only know what you know” and at the time I was promoting my message only knowing what I knew. Thankfully with more experience in the industry and life experience also I am now able to pass on an updated message.

Bread + cereal didn’t make me fat, overeating and lack of exercise made me fat.

Eat less, move more, continue to eat whole foods 85% of the time and for God sake do not sweat the occasional fry up

If this message can help just one person to not go through what I did then I will be delighted.