You Don’t Want It Enough 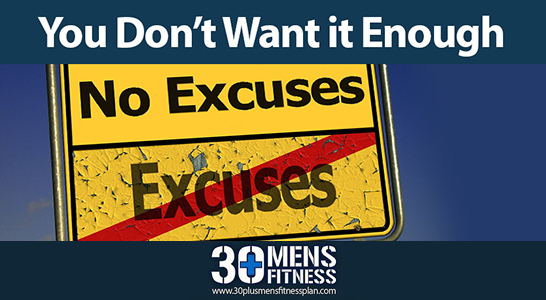 Back in 2017, I saw a post from a fellow fitness professional that said “It’s okay to just accept that you don’t want it enough.”

This guy was talking about people announcing their goals but simply NOT taking the actions to achieve them.

The reason it hurt me was because it actually made me think deeply about my own goals at the time and how, despite saying I wanted to stay at a certain weight / bodyfat level, my weekend behaviours were simply not reflecting what I ‘claimed’ I wanted to achieve.

It’s one of the reasons I quit alcohol for 5 months in 2017 and trained for 4 x half marathons across 4 weekends back in September / October. I needed a BIG goal to prevent me slipping back into bad habits of drinking too much on a Saturday night and then overeating.

I knew a BIG and DAUNTING goal would force me to change; it did. But forget about me.

Each week I speak to many clients both in person and online who tell me how much they ‘want to lose weight’ – ‘improve fitness’ blah blah blah but their actions do not reflect what they are saying.

This is NOT a dig but it is an observation by the way.

It got me thinking.

It is actually okay to ACCEPT you DON’T want it enough – there is actually no shame in admitting it, because lets face it, if a person wanted it enough they would do the work required right?

And I get that life is tough, we have financial pressures, it’s been a long week, the kids ain’t sleeping, you’ve worked hard and want a reward on the weekend.

But if that reward (excess booze, junk food, lack of exercise) does not reflect the goals you have set yourself and you still over indulge then understand that you don’t want it enough and that’s totally cool.

Not everyone achieves their goals; in fact a LOT of people don’t achieve their goals.
Motivation often gets someone started but discipline will keep you going and this is where mind-set comes in to play.

But (if your goal is fat loss or performance related)

You DO have to be mindful of alcohol consumption (there’s a massive difference between 2 beers and 20 across the course of the weekend).

You DO have be mindful of your calories (you may not be in a massive deficit all weekend but you can break even, right?)

You DO have to move and not sit on your arse.

If you told yourself at the start of the week your goal was to lose weight but you plan to drink Friday / Saturday and Sunday excessively then you may just have to accept you actually don’t want lose weight bad enough.

Food for thought? I hope so?

Hurt you a little? Good, I hope it sparks you into life like it did for me.