How did he do that? 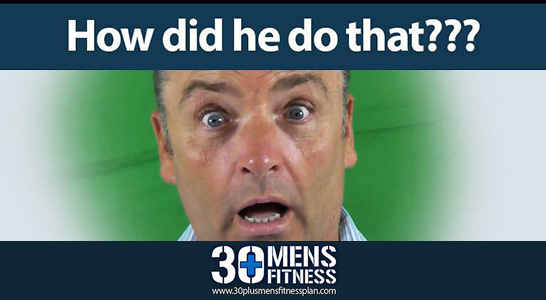 Last year we had a new guy join our free global Facebook community and share his before and after pics which were amazing.

I have to say they were super impressive and sparked a huge response from the lads who gave him lots of likes and comments which I was chuffed about for both him and us.

It showed what an amazing bunch of guys we have from across in the globe in our community and Kelvin (new guy) immediately felt at home.

And on top of all of this we had many guys asking him ‘how the hell he did it?’

Now I get that I truly do as the transformation was so impressive.

But here’s the thing.

I expect some of the lads asking the questions were expecting some kind of ground breaking answer, a modality of training they had not yet heard of or some new ‘miracle diet’.

The truth is it was none of that.

He had used the cross-trainer and bike for cardio as running hurt his joints.

He started to lift weights 3 x per week

He tracked his calories / macros to the letter.

So in essence – he started to move more and eat less.

But, what Kelvin did which WAS extremely different from many.

He fucking stuck to it!

He was consistent in his training and nutrition for the entire 7-8 months he’d been on his journey – and that my friends is the difference.

So many guys are jumping from diet to diet, giving new ways of training literally 2 weeks before giving up, getting bored and looking for a new fix.

Kelvin is living proof that if you have a plan and follow it you will get results.

Look there are many ways to skin a cat but you have to pick one and stick to it.

It’s all exercise that people have gotten fat loss results from doing on a consistent basis combined with improved nutrition for a sustained period of time.

The key is getting started and being consistent.

Only when you have given you’re plan a period of time can you see if it is working for you or not and then tweak it.

But if you are simply having a dabble with exercise and eating better during the week only to be a complete greedy bastard and fall mindlessly into beers and endless junk food all weekend – then you need to wise up and understand it doesn’t matter what you try it won’t work if you are not consistent.

Struggle with consistency? Decide exactly WHY you want to change and use that as a motivational driver when it gets tough.

Kelvin said he changed because, in his own words

“I woke up one day and realised how much my weight was effecting my health, bad back, asthma, feeling fat and bloated from over eating…. I knew I would probably be heading for a heart attack. I wanted to live for my daughter”

If living a longer more fulfilled life for your kids isn’t motivation then I don’t know what is.

But guys, please, if you are currently doing nothing, or trying and not sticking to something time and time again – realise you don’t need to worry about the next training modality or quick fix diet – you need to give your plan some time and be consistent.

Fat loss comes down to moving more and eating better (less) CONSISTENTLY, just like Kelvin did….

Stop over thinking it,

Figure out your WHY.

Plus any help you need along the way, just ask!